We were only expecting a couple of volunteers at our most recent planting day on Sunday, 26 July and were pleasantly surprised to be joined by an enthusiastic team of 6 (8 of us in total) including Frankie Hofland and her husband Nick; landowners at Pakiri.  Frankie is a co-ordinator for Trees for Survival and along with Nick is involved in the local Pakiri Landcare Group.

We met at 9.30am and carted the sedges further up the valley to the Harvey’s wetland area.  Approximately 10 square metres of tradescantia was cleared and planted with a selection of sedges.  In no time we had filled 3 large weed bags and were reminded what a mammoth task we have ahead of us.  The rain held off until 1.00pm when it became slippery under foot and we decided to call it a day. 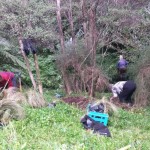 Weeding prior to planting 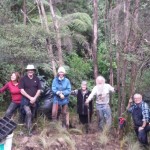 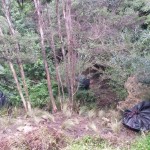 On Friday, 17 July Jo Evans and Susan Gibbings assisted Cam Rathe setting up the new stoat line. With the 5 traps that Cam had brought they had 9 to set up in the valley. They placed the first on the Erikson’s main track down to the wetland, on a corner beside the large old pine tree. The rest (8) were spaced at roughly 100-150 pace intervals up the valley near the stream.

All traps were set with fresh rabbit meat (from Cam’s first shooting session).

The traps set up on the baitline along the BNZ track were checked and contained the following:
No.1 weasel

No.4 tripped but no catch

Since then, another two stoats have been caught and 2 large rats.

We headed off at 9.00am on Sunday, 12 July to plant some of the plants, funded by Auckland Council’s Environmental Initiatives fund.  A scheduled planting day was postponed due to lack of numbers, however, with the help of family members (James and Margaret Young, our daughter Anita and her friend Charlotte Nankerville), we spent 3 hours transporting the sedges down to the valley, clearing tradescantia, kikuya and African Club Moss and planting 120 plants.  It was a frosty morning but we soon warmed up and before long had removed our jackets and woollen hats. 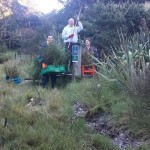 Delivering plants to the valley 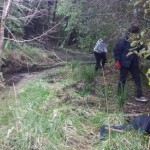 Stream bank prior to weeding and planting 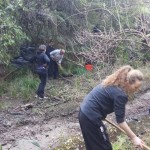 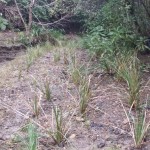 Stream bank after planting of sedges

In the afternoon, Chris and I worked on clearing one of the tracks along the coastal walkway in order that the pest line can be established by Cam Rathe.

All the plants obtained via the Environmental Education Fund are now in thanks to a small but enthusiastic team of volunteers.  Michelle Gordon, the Canadian Biodiversity exchange student travelled up to Leigh with me for the day on Sunday, 28 June.  We commenced planting at 9.30am and after an hour of digging very hard and dry soil were starting to feel rather disillusioned as we had only planted about 20 plants.  We were soon joined by Rick Carlyon and his son-in-law Lachie who dug the holes with a pick while we planted.  It was a great system and by 1.30pm we had completed the job. Richard Taylor, Sue Gibbings, John Harvey and Emily Harvey kindly gave up their Sunday morning on 14 June to split the flaxes transferred from the Carlyon’s property and plant them on Julie Turner’s wetland area.  This proved to be a time consuming task due to the length of the roots and the height of the kikuyu.

After spending 1.5 hours working on this task, Sue Gibbings joined me on the Carlyons where we spent another hour planting the area cleared at the previous working bee. 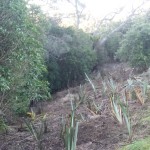 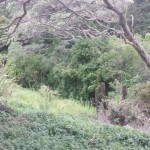 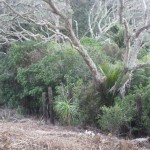 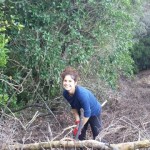 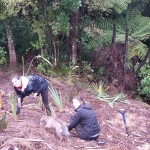 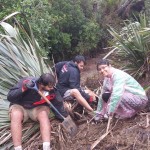 We were expecting 4 workers to assist with weeding around the trees planted by Takapuna Intermediate/Trees for survival and were pleasantly surprised when we ended up with 9 enthusiastic volunteers.  Unfortunately a lot of the smaller plants did not survive the dry summer including the cabbage trees which were eco-sourced and re-planted last winter.  According to Mike Francis, the chemicals sprayed to enhance his maize crop also caused the kikuyu to go crazy and this was very evident in this fenced area.  The stream bed had disappeared and further spraying will be necessary in advance of the planting day in August.  Despite the number of plants lost, there are some very healthy specimens present, particularly the coprosma and flaxes which seem to thrive in the environment. 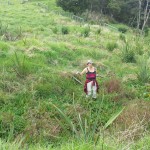 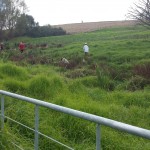 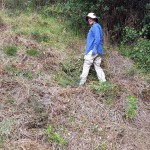 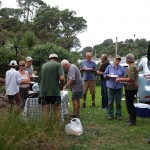 Unfortunately our first planned weeding/planting day had to be cancelled due to cyclone Pam.  On 29 March we continued work on the Gundy’s property; clearing weeds on the borders of the stream.  Thanks to our volunteers Jo and Sue Evans, Richard Taylor, Arthur and Trish Gundy and John Harvey 3.5 hours were spent clearing areas which had previously been worked on.    Clearing Tradescantia does appear to be a rather sole-destroying task but we are determined to win the battle!

We have a contest underway.  Jo Evans has managed to catch 3 more stoats in the past two weeks; almost matching our count for the whole year.

More traps have been purchased and with the help of Ditch, from Coastal Pest Solutions, we plan to set up a stoat line which will be monitored regularly.

4 hours were spent clearing cotoneaster as well as other weeds and spraying periwinkle on the Carlyon’s property in preparation for planting this area at the end of May.

Due to an extremely hot summer, we have made very little progress in the valley although we managed to pull out a bit of moth plant.  The rabbit population has increased and pest control expert, Ditch Keeling, will be targeting the area within the next few weeks.

A big thanks to Jo Evans and Sue Gibbings who have been carrying out pest control along Tenetahi Rd.  Their recent catch includes four rats and one stoat, dispelling the theory that all the stoats are located on the Mt Pleasant side of the valley!