Richard Aickin shared our love of Leigh. In August 2020, he and his wife Jan bought a property at the top of the catchment, with the aim of continuing with the restoration of this ecological treasure. They attended a working bee in November 2020 and proved to be very energetic and enthusiastic volunteers. We were delighted to have them on board and were reassured when Richard told us he hoped not to be needed as a specialist in emergency medicine. Richard discovered an Australian Water Dragon in the valley and, later, an exotic turtle. He joked ‘Not sure what we’ll find next. Will need to call in reinforcements if it is a crocodile!’

Tragically, in early 2021 Richard was diagnosed with a terminal illness. While his ailing health meant he couldn’t participate in further working bees, he followed the progress of our volunteers’ efforts with interest and we kept in contact via email.

Richard passed away on 8 May 2022 at the age of 62. We regret not having the opportunity to get to know him better. He was clearly a lovely, caring man with a great sense of humour and a passion for the outdoors and we feel certain he would have made a huge contribution to our restoration efforts. We are extremely appreciative of the generous donations made by his family, friends and colleagues in his memory.

I would like to pay a tribute to my brother Ian Paine, who passed away in May this year, after a battle with prostate cancer. Ian was an ardent supporter of the Leigh Harbour Valley Society and attended several of our earlier working bees. He recorded a video of the valley which can be viewed here. He really wanted to return to Leigh but, in the last two years, was too sick to travel.

In late November I recorded a follow-up video of the area Ian filmed in 2012. I know he would have been thrilled with the progress we have made.

Ian is pictured 2nd from the right in this photograph taken in February 2012 clearing Tradescantia, along with Alexander Paine to his right, Margaret Scott in the foreground and Niklas Erikson in the distance.

Sadly, in recent months, three members/supporters of the Leigh Harbour Valley Society passed away.  We would like to acknowledge their contributions. 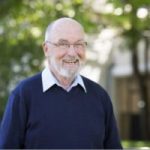 Alistair Scott (26 May 2017) – Alistair was a member of the society since its establishment in 2009. He was a professor of statistics at Auckland University and considered to be one of the finest statisticians New Zealand has produced. Alistair enjoyed retreating to the brown cottage at Leigh for holidays with his family and, along with his wife Margaret, participated in a number of our earlier working bees. 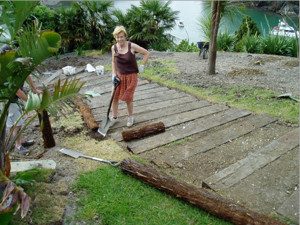 Elizabeth Ebbett (25 June 2017) – Elizabeth and her husband Richard have been supporters of the society for several years. They put a great deal of work into native planting and pest control on their property overlooking Leigh Harbour; including the steep bank below their property which is owned by Auckland Council. We recently received news that Elizabeth has left a generous bequest to the society. We are very grateful for this donation which will provide a huge boost to our restoration efforts.  We have decided this money will be put towards increasing pest control and maintaining the Ebbett’s work above the harbour; so that all members of the community benefit from Elizabeth’s legacy.’

Sir Duncan McMullin (26 June 2017) – Sir Duncan, owned a number of hectares of land along Cape Rodney Rd. His last remaining block, which forms part the catchment area on Mt Pleasant Drive, was sold late last year. Sir Duncan allowed us to plant this area in conjunction with Trees for Survival and Auckland Council. He was extremely supportive of the society and made several donations which he recommended be used to feed the volunteers.

A special tribute to John Haigh

We are deeply saddened by the recent, sudden death of John Haigh.

John was a member of the society and was extremely supportive of the restoration project from its onset.  In 2005 he helped plant the wetland area on our property, along with Sue.  Despite his busy workload, John found time to participate in planting/weeding days including the most recent event two weeks ago during Easter.   He was also actively involved in fighting the battle against weeds at the bottom of  Mt Pleasant Drive.

John had an amazing ability to relate to people from all walks of life.  He always made an effort to stop and say hello.  He had a fantastic sense of humour and was extremely caring and understanding.  He was a wonderful neighbour and we will always remember him with great affection. 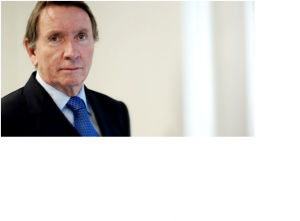 A group of friends and neighbours met on 11 August 2012 to plant a memorial kowhai grove in one of John’s favourite spots. 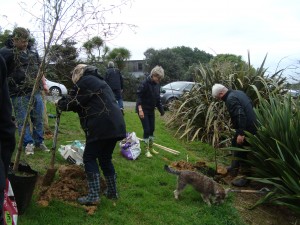