On Monday, 7 September Chris and I spent 5 hours planting the sedges at the bottom of the valley and weeding around the existing plants.  On Sunday, 11 October 5 hours were spent weeding and spraying around plants on the Carlyons.  Unfortunately a number the plants (pratia angulata and Muehlenbeckia axillaris) which were positioned near the large pohutukawa were looking quite unhealthy, due to the dry conditions although I am hoping some of them will survive with a bit of TLC (and some watering).  The transplanted flaxes appear to be doing well.   On Friday, 23 October Trish Gundy and Richard Taylor joined Cam Rathe where they cleared and pasted privet along the stream edges.  Cam will continue this work throughout the valley.  On Monday, 26 October, Chris and I spent 4 hours planting the remaining sedges and weeding around plants on the Harvey’s property which had become covered in bind weed as well as plants on the wetland area at the bottom of the valley.

Along with Ngaire Wallen from the Baddeley’s and Buckletons Beach restoration group, Chris and I visited Cue Haven where we met the owners Tom and Mahrukh.  We were blown away by their wonderful restoration work on what was previously bare pasture with only a narrow strip of established native trees alongside a stream.  They clearly have incredible organisational skills and appear to be the experts in recruiting volunteers.  They work with a number schools and tertiary educational groups including students participating in the Duke of Edinburgh’s award programme, Unitec students as well as Auckland University students and other charitable trusts.  We also met their friends and neighbours at Mataia, Gill & Kevin Adshead, who were responsible for initiating The Forest Bridge Trust www.theforestbridgetrust.org.nz and Sue Cameron (a previous DoC employee who works for the trust).  Their vision is to create a pest and predator free green belt from the Kaipara Harbour to the Omaha Estuary.  They hope to soon be working with Leigh School which should have positive spin-offs for our project.  An enjoyable afternoon was spent sharing ideas and restoration experiences. 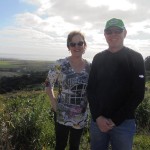 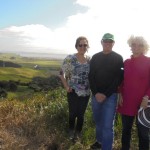