Sunday’s weeding and planting day at the top of the valley was a huge success.   It was a gorgeous day and thanks to 18 volunteers (including members of the Leigh Coastal Care group) we made considerable progress clearing weeds, eco-sourcing and replanting alongside the stream.  Many thanks to Trish and Arthur Gundy for a delicious BBQ lunch.  Thanks also to Nola and John Harvey for the bottles of ‘Black Stilt’ Riesling, Pinot Noir and Pinot Gris from their vineyard in North Otago.  These excellent wines went down a treat with all the volunteers.
Nik dug up a small fish from the soil (over a metre from the stream).  For a moment with thought he had unearthed the threatened Mudfish but it turned out to be a Banded Kokopu, which probably made its way into the soil after being dragged out of the stream with some tradescantia.  Nik had initially mistaken it for a slug so it was lucky to survive. Cheryl also located a kauri snail.
The next planting day will be held on Sunday, 21 September on Mike and Fiona Francis’s property, Cape Rodney Rd (previously Mrs Wainwright’s).  Unfortunately we have lost a number of plants which failed the ‘Pukeko test’ and a few more were lost due to the drought so we need to fill in the gaps and continue planting further downstream. 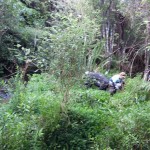 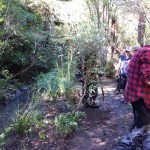 Muddy Banded Kokopu just after being dug out of soil 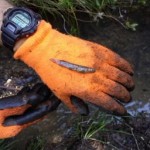 Banded Kokopu after a wash in the stream 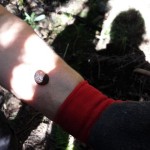