The following is a photograph of a stoat caught in the valley recently.  According to our pest control expert, Cam Rathe, it is one of the largest he has ever seen (and he has caught hundreds). 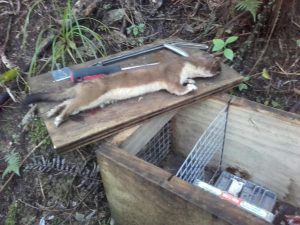 Volunteer members Jo Evans and Sue Gibbings have been regularly checking the stoat line as well as controlling pests on their own property and have caught a number of rats, stoats, weasels and mice. Thanks to their efforts and the efforts of other dedicated members, we are making huge progress in the valley and there is a noticeable increase in bird life.

My son Nik and I attended a workshop at the DoC Warkworth office on Monday, 11 July, to learn about DoC’s new mobile application for recording trapping information called ‘Walk the Line’.

DoC and Auckland Council staff who look after some of the Auckland regional parks were present, along with the local Tfs representative Frankie Hofland, Liz Maire (the Forest Bridge Trust educator) and Kevin & Gill Adshead trustees and founders of the Forest Bridge Trust.  Kevin and Gill are an inspiring couple who are farmers of a 3,200 acre seven-generation family farm at Mataia on the Kaipara Harbour.  You might have seen them on Country Calendar a few years ago.

The vision of the Forest Bridge trust is to create corridors of native bush and thriving native wildlife from the Kaipara Harbour to the east coast including Pakiri and Leigh by connecting bush remnants, fencing and running a concentrated pest control programme.  The Forest Bridge Trust are working closely with schools to eradicate pests via the CatchIT Schools programme.  Each student gets a range of pest traps to take home and the results of this pest control programme are recorded.

This project will have positive spin-offs for all those involved in bush restoration in the surrounding areas.  It is important to be protecting forest remnants with fencing but our efforts will only be successful when we see an increase in native birdlife and other native fauna.  It is exciting that the CatchIT project is being supported by Leigh School and we hope to see the benefits of the children’s pest control activities and to be able to work more closely with the school in the future.