It had threatened to be a wet and stormy day but we received reports the sun was shining at Leigh so decided to head up for our planned weeding day.  We arrived at Tenetahi Rd shortly after 9.30am where we met Nola and John Harvey and helped them transport some plants down to the wetland area.  Richard Taylor, Arthur and Trish Gundy approached the valley from Pakiri Rd and continued weeding in that area.  After several days of torrential rain it was rather slippery and very muddy under foot and it was evident the from the flattened sedges that the stream had reached a high level during the heavy rain fall.  Nik planted the remaining sedges stream side and we planted some of the pratia angulata upstream.  We then headed back down the valley and started rolling a large area of tradescantia.  Further pratia was planted along with some eco-sourced sedges.  We packed up our tools at about 1.00pm when the weather started to turn.

In the afternoon I met with Chris Floyd from QEII and took him through parts of the covenant and to other areas of our project.  He provided some helpful advice regarding how best to approach various weed challenges; in particular controlling the tradescantia.  Like Cam, he was of the view that we should ensure this weed is cleared before planting to avoid the risk it becoming re-established.  He recommended a few drought-tolerant species for the Carlyon’s property including astelia.  All in all, a successful day. 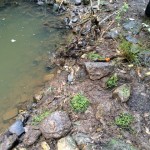 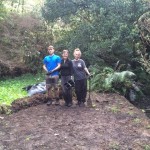