The Leigh Harbour Valley Society is delighted to be included in the publication, Paradise Saved, due for release on Friday, 15 August.

Thanks to Jo Evans who recently carried out 5 hours of weeding and planting along the concrete driveway.

A BBQ lunch will be provided.

On Thursday, 25 April, Arthur Gundy and 2 contractors, cleared all the transcantia from around the waterfall area at the top of the catchment area.  On Sunday 27 April Arthur, Jo Evans, Nola Harvey and I spent 3 hours clearing weeds further downstream.

Another successful weeding day was held on Sunday, 29 June on Julie Turner’s property.  Our new neighbours Mike and Francis attended, along with Sue Gibbings, Jo Evans, Richard Taylor and Arthur Gundy.  Further planting will be necessary once the kikuya has been sprayed. 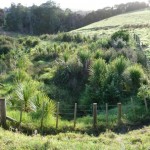 While the turn-out of volunteers wasn’t that great, we had a very worthwhile weeding effort with the guys from Biosecurity Services on Sunday, 23 March and worked for 3 ½ hours clearing a number of weeds from the wetland area behind the brown cottage.

Thanks to Neil and Cheryl Sutherland for all their hard work.  Neil and Cheryl have been waging a war against weeds in Leigh for a number of years and are the founders of the Leigh Coastal Care group.   It is thank to their efforts the coastal walkway is maintained on a regular basis.  Their main focus has been controlling moth plant which they are able to spot a mile away.  They have a wonderful community spirit.

Thanks to Nola Harvey who attended for the first time.  John Harvey understandably decided to stay behind after a couple of nasty encounters with wasps although we hope to see him in the bush in the not too distant future, heavily clad in protective gear!  Thanks also to Chris Erikson and Pete Watkinson.

We look forward to some wet weather so we can start planting the areas we have cleared.

Chris and I spent 2 hours spraying and weeding the remaining TFS plants.

Unfortunately approximately 100 plants on the north eastern corner of the wetland area have not survived (or disappeared).

This particular area was quite boggy when planting took place on 29 September and the majority of plants were very small.

It is possible they failed the Pukeko pull test.  While there were a few dead plants, the others appeared to have disappeared, with only the stakes remaining.

There has been a real problem with wasps this summer and several society members have been stung.  These venomous creatures, which apparently are German rather than paper wasps, seem to be particularly aggressive.
Attached is an article from the Rodney Times about the increase in wasp numbers which is due to two dry, warm summers.
http://rodneytimes.realviewdigital.com/#folio=1

I am somewhat behind with updating the website due to being busy with family weddings and work related projects since mid January.
Chris, Anita and I managed do 4 hours weeding of the Trees for Survival plants on Mrs Wainwright’s property on 7 and 9 January, nice and early before it became two hot.  The plants are doing extremely well.  Further weeding was carried out on our property and McMullins where the plants are now well established.  We plan to organise a further weeding session within the next few weeks and will be putting together a timetable of forthcoming events.  High on the list is a repeat of our very successful Big Weed Day out. 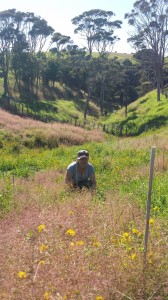 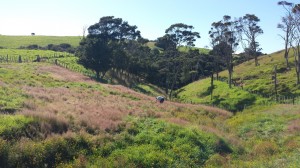 The following is an update from Jo Evans regarding the work he and Richard Taylor have been doing.
‘Over the past few weeks Richard Taylor and I have been straightening the post and wire fence around Julie Turners wetland plantings. The fence had suffered from the pressure of Julie’s cattle over the last couple of winters when the ground was soft. Many of the posts had been pushed well over towards the trees so the steers could get at the tasty species, especially Comprosma. The wires we getting slack and many of the battens had been pushed sideways. We have had a number of sessions after work digging out on the uphill side of the leaning posts, pulling them upright. On a number of them we installed a stay back behind the fence to keep them upright. We have nearly finished, having re-tensioned the wires yesterday. We plan to straighten the battens and tighten the staples after work on Tuesday. I understand from Richard that Julie indends to get a permanent electric fence installed on the fence.
I have had several sessions down the concrete drive and along the paper road (ie Tenetahi Rd extension) pulling out moth plant and a few small ginger sproutings; spraying the jasmine that is re-sprouting after the Biosecurity boys’ work on it in December; spraying some re-sprouting Queen-of-the-night; cutting off flowering pampas heads and spraying the plant.’

Arthur and Trish have also been busy maintaining the catchment area planted on Pakiri Rd; weeding and spot spraying as well as removing jasmine, New Guinean impatiens, honey suckle and one unknown weed from the edge of the established bush. 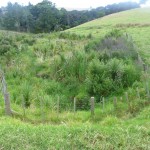 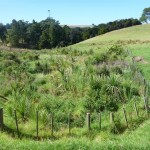 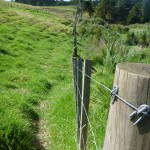 Thanks to Jo Evans, another plant has been identified as being a real threat to the bush.  The Biosecurity Services representatives identified the plant as Queen of the Night.  Jo has noticed it is spreading fast and spent the whole of Sunday 16 December working on clearing this plant from the uphill side of the path at the bottom of Tenetahi Rd.  He said he will tackle the other side shortly.  Jo  found the following on Wikipedia…..
“In Auckland New Zealand, it has been reported as a seriously invasive weed to the Auckland Regional Council and is under investigation. NS Forest and Bird is compiling an inventory of wild cestrum sites in order to place the plant on the banned list. The inventory can be viewed via Google Maps. Some nurseries still sell it without warning customers of the dangers to native bush reserves. It has been reported that the plant has been removed from some old folks’ homes due to the strong scent causing difficulties for the residents.”

Thanks, Jo, for your dedication to our project.

We had 2 successful days weeding with Mike and Carl (contractors from Biosecurity Services) in the bush below
Tenetahi Rd.
Mike and Carl concentrated on the jasmine and honeysuckle while we worked our way through the ginger which seemed to stretch
on for miles.
Follow-up spraying of the jasmine will be necessary in February.
Thanks to Auckland Council for providing funding to employ the contractors and to our volunteers Niklas Erikson, Anita Erikson, Margaret Scott, Arthur Gundy, Jo Evans and Pete Watkinson.
Thanks also to Pete and Liz for providing accommodation for Mike and Carl and to Pete for transporting us up and down the hill
in his ‘Mule’.  If it is fine in Leigh tomorrow Mike and Carl will continue clearing the Jasmine for another 10 hours; otherwise
they will return prior to Christmas.

Jo Evans and Sue Gibbings have been working hard along the concrete driveway.

2. scattering kumarahou and whau seeds on the bare clay

3. staking many of the seedlings planted there

Four weeks ago they joined forces with Margaret and Alistair Scott where they worked in the same area.

We look forward to seeing the results of their efforts during the summer months.

Our first community weeding event held on Sunday 8 September was a huge success.  20 volunteers worked for a period of 3 1/2 hours clearing weeds along the paper road and at the bottom of the concrete driveway.  After lunch 5 volunteers continued weeding, eco-sourcing and planting for another 1.5 hours.
Many thanks to members of the Forest and Bird Coastal Care group, Neil Sutherland, Sheryl Corbett, Grant Sneddon, Tracey Paton, Katrina Hunter, Maggie Isaac, Laurel Breen, Brian Breen and Paul Williams who made a huge impact on a dense area of ginger along the paper road and filled 2 1/2 large black weed bags with ginger roots.

Thanks also to Arthur and Trish Gundy who organised a delicious spit roast lunch and to LHVS volunteers Richard Taylor, Chris Erikson, Sue Gibbings, Margaret and Alan Scott, Linda and Alan Lee and Pete Watkinson who assisted with weeding; in particular removing turnips from the bank alongside the concrete driveway and replacing them with native plants.  (Turnip seeds were inadvertently sewn by a contractor instead of grass seed).

We hope to hold a similar event before the end of the year. 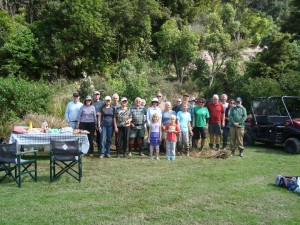 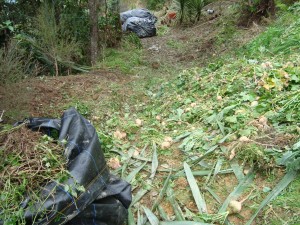